The Chicago World Series once again took play in its cozy little nest of mid-November (November 14th) this past weekend.

Once again, my friend Doug Schuyler led the charge & once again, with no surprise, everyone had a blast! I love how in each of these tournaments and other tournaments, the host keeps adding new things and mixing it up.

This year, they added a first pitch, a "State of the Game Address" (presented by my friend, Pastor Rich Zawadzki), and a All-Star Game featuring star players from teams featured at the tournament. They also added sheets on the wall, with the tournament division results. In the past, I know there has been home run derbies as well.

I unfortunately could not make the Winter Tournament, and have not made that or any of the Chicago tournaments since Winter 2013. It's great going to these tournaments because we form new friendships through a game that we love, in APBA & in Baseball. I have now missed a few of these, and have watched some of the returnees form stronger relationships, and I can't wait to build more on these friendships as well.

It's one thing chatting on Facebook with one another, but its an amazing experience to really get to meet these wonderful smiling faces in person. Everyone is like a kid in a candy store.. but in this case, more like the closest thing to playing a ball game on the Field of Dreams. We are literally children again, laughing and playing, having fun!

These tournaments are... Our field of dreams! And these dreams are possible due to people like Doug, Rich, and the others that have followed in their footsteps to host these tournaments, and also just as important as all of the people that come to compete in these tournaments. It is indeed a magical experience, a natural high -- personally, a life moment that you will always remember.

It's also a great time to bring family as well. I had the experience of going to the GMABT (Greater Michigan APBA Baseball Tournament in Jackson, MI) with my brother, Christopher. The Pikes have also made these tournaments a family thing in Joel and Matthew Pike (father and son), it is really cool to see that generations are passing this game on down to other generations we need more of this in the APBA community, to watch this game continue to grow.

By the way, what I love about the picture above, is that you can tell that both father and son are close; I really can't wait to see those guys in person, as well as others in the upcoming tournaments. Also, I can't wait to talk with Joel, I love his creativity on his Presidential APBA Baseball Tournaments, you can check them all out on his blog KYDiceGuy. You really should read his post on the Chicago tournament, as well as Thomas Nelshoppen's piece on The APBA Blog.

Some photos of the tournament... 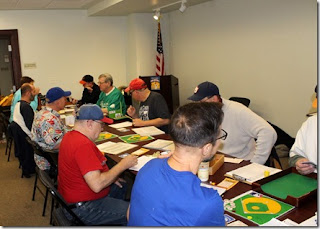 The Tournament was won by Gary Lindley and his 1972 Oakland Athletics. I had the privilege of playing against Gary in the Chicago World Series (Winter 2013), which my 1912 New York Giants ended up taking both games from his 1931 Philadelphia Athletics. Gary was wonderful to talk to, plenty of knowledge for the game of baseball and APBA itself.

He would defeat Bradd Romant's 1977 Los Angeles Dodgers in the championship game, 4-1, with a pair of Reggie Jackson home runs.


I hope that you enjoyed my piece on the Chicago World Series (Winter 2015) Tournament. If you have not had the privilege to play in these tournaments, you really should go ahead and do it & live it, there is no experience like it in the APBA world. It's one thing to play alone, or even play a local friend, but a tournament's atmosphere is something completely different...

You need to live the experience...