First off, let me begin by saying that this is actually my first time participating in a Fantasy Baseball League... I know, I know.. quite shocking, but believe it or not it's true.

The draft happened about a month ago, and I got the 2nd overall pick in which I took SS-Hanley Ramirez, a no-brainer pick after someone took the obvious top pick on Albert Pujols. I would get A-Rod & Adrian Gonzalez on my next two picks, I goofed up on not grabbing Mark Teixiera as my Corner Infielder option (CI), I took a catcher in Brian McCann, which is good C pick, but early. Of course some jack-ass that goes by Phish in my fantasy league called me out on it, in the draft chat room; and then went on to call me out "First time in a fantasy baseball league, huh?"; yeah I guarantee he's no match to me in APBA. So let's just say I every extra incentive to at least past him in the standings this season if I don't succeed at winning it. 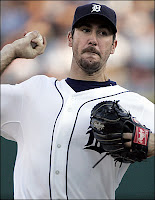 My first day was a good one, I jumped up 11 points thanks to 8 strike-outs from my top starting pitcher Justin Verlander, a save from the best-in-the-game closer Mariano Rivera, and a HR from Torii Hunter. The next day was a complete opposite when I lost 17 pts; but bounced back to 66 the next day with Uggla, A-Rod, Hunter & Austin Jackson.

Two days later I was up to 72.5 and was actually 5 pts behind the leader.

But now after 2 1/2 weeks, entering Period 3, my team has fallen to 48 pts, 7th in the standings, I finally came around to benching A-Jaxx (DET's Austin Jackson) and Uggla (who's been playing UGGLY!), I signed 2B-Orlando Hudson yesterday morning and started him over Uggla. Hudson was batting over .300 and has 6 steals (Padres' base-running coach Dave Roberts has him stealing more... which is great, cause I need Stolen Bases like Kurt Cobain needed Heroin). Also in the steals department, I dropped Julio Borbon, who wasn't doing squat, benched A-Jaxx, and brought up Dexter Fowler who seems to be having a pretty good start with Colorado, he's been a sleeper for a couple years now, so hopefully he's breaking out finally.

I resigned Alfonso Soriano, who was actually the first player I dropped because I got excited early on Brandon Belt, who we can say is now sitting on the pine on the waiver wire. Soriano has 5 HRs for the Chicago Cubs, so I got some power back on the OF squad. Adam Jones has been dissapointing so far, hitting around .200, but I have no room to bench him right now, and he happens to hit an occasional HR. I released Cody Ross because he has been on the D.L. this whole time.

The SS position has been interesting for me, I released Marco Scutaro as my bench middle-infielder, since Yunel Escobar has been playing like an MVP early on, and since I have Hanley Ramirez. The only problem Ramirez is in the middle of season-starting slump, but I would be a mad fool to EVER release this fantasy monster... when he bounces out of his slump, and my 1B-Adrian Gonzalez steps up his game, my team should se immediate success on those 2 alone!

I made some good pitching moves of late that I believe will help lower my ERA and WHIP, besides yesterday's catastrophy for Travis Wood (vs. PIT), I believe he'll get me some K's, since he's a young stud... I released Rick Porcello, who was only good for wins really, ERA and WHIP could be a strength with him, but he's doing nothing but hurting in those 2 catagories.

I made an early mistake at dropping Oakland's Brian Fuentes for Boston's Daniel Bard, at the time it appeared to be a really good move since Boston closer Jonathan Papelbon struggled through Spring Training and Oakland had a closer in Andrew Bailey. The very next day, Daniel Bard got rocked (thank goodness I had him on the bench, otherwise that would have been 54.00 ERA added) and Andrew bailey got hurt. Fuentes, has since been picked up by someone, and has now earned at least 5 saves. Also my late draft pick Chris Sales wasn't paying off. Bard & Sales have been released, I picked up Farnsworth for a day, then released him for Twins' new closer-for-now, Matt Capps.

I'm excited about two starting pitcher signees Kyle Drabek (TOR) and Michael Pineida (SEA), they both have really low ERAs and good amount of K's; I think they will continue to benefit me, so YAY! for me! Nay for Wandy Rodriguez who has been a down-right disappointment early on, hurting my ERA and WHIP, he pitches against Mets later today, and the Brew Crew later in this period; if he falters though, to the bench he goes!

Back issues for both A-Rod and Oswalt, have me on alert at the moment, can't afford to lose either one of them, even for a little bit.

Sam Fuld, I'm excited about this pick-up, he could be one of those Scott Podsednik out-of-nowhere kind-of-players... he's got a bundle of steals already, and is in the top 10 leaders in batting avg. Hopefully he doesn't get figured out, because he could really pay dividends as a total steal.

We'll see where we are at in a week!
Posted by Shawn Nova at 5:06 PM No comments: