My 1901 Pittsburgh Pirates have just taken their first cracks in a double-header exhibition against the 1909 Detroit Tigers at Bennett Park (in Detroit); They are getting prepared for Jackson, Michigan for this year's Greater Michigan APBA Baseball Tournament III (March 4th).

The game would start off with a one-out solo HR by Ginger Beaumont for the Pirates off of Detroit's Mullin in the 1st Inning. The Pirates' Kitty Bransfield leads off the 2nd with a walk, would steal second & then advance to third on a fly out by Lefty Davis; Bransfield would score off Claude Ritchey's sac fly. Pittsburgh would pad their lead in the 4th with Honus Wagner scoring off a Chief Zimmer sac fly.

Just when the Tigers appeared to have no answers, the Tigers would answer the call with 2 runs during the bottom of the 4th Inning, with a sac fly RBI from Jim Delahanty & RBI double from Tom Jones -- trimming the Pirates' lead to one run, 3-2.

Bottom of the 6th -- Sam Crawford leads off with single, which is followed up by Ty Cobb's single, advancing Crawford to third base; Cobb would steal second base, runners on 2nd & 3rd with no outs. George Moriarty hits a fly to center that does not advance the runners, while Jim Delahanty hits a infield fly, with no success as well. With two outs, Deacon Phillipe makes the mistake & balks, advancing Crawford to score, while Cobb advances to third -- tying the ballgame at 3-3. Tom Jones fails to get Cobb in for the go-ahead run.

Ginger Beaumont would collect a lead-off single in the 8th, only to be caught stealing, during Tommy Leach's at-bat; Leach would fly out. Honus Wagner would give Pittsburgh a brief, 4-3 lead with a solo home run... too bad, Ginger had to get thrown out at second. Two homers for the Pirates in their first exhibition game, I am thrilled by this.

Same lineups, different catchers & pitchers for both teams; The Pirates will feature Jesse Tannehill (Grade A-Z) on the mound, with George Yeager (instead of Chief Zimmer) behind the plate -- while the Tigers go with pitcher Ed Summers (Grade A-Z) and backstop Oscar Stanage (instead of Boss Schmidt).

This game started off, in the same way it left off -- both Sam Crawford & Ty Cobb still collecting hits. After a one-out, single & stolen base by Donie Bush during the bottom of the 1st... Crawford smacked a triple to deep center, driving in Bush; Cobb would follow with RBI single & a stolen base of his own. Tigers lead 2-0 after one.

Top of the 3rd, with two outs, Bucs' pitcher Jesse Tannehill would reach first on an error by Davy Jones (playing CF)... Okay... I need to do a quick shout-out to my APBA blogging friend Shay Simmons, if this was her post, I am pretty confident she would have used pictures of musicians Davy Jones & Tom Jones already... so here you go, huge shout-out to Fireblossom!


Well, back to the action, folks!

Tannehill just reached base on a error by the 'daydream believer', which setup a RBI double by Fred Clarke, cutting the lead in half, 2-1.

Once again, Sam Crawford & Ty Cobb countered again during the bottom of the 3rd, with a two-out single by Crawford -- Cobb would smack him in on a RBI triple, giving the Bengals a 3-1 lead...

The game would remain gridlocked at 3-3, until the top of the 9th, when Lefty Davis would come through again, with an RBI one-out single to score in Honus Wagner from second (after a single & steal) to take final 4-3 score.. It was not easy to close out the Tigers though, after two quick outs, it was Sam Crawford & Ty Cobb (again!) -- Crawford hit a single to right, while the Bucs did not want to take any chances on Cobb & for good reason, he was 6-for-8 during the double-header -- including a triple, two runs, 4 steals & 2 RBI! So intentional walk it is, leaving everything up to George Moriarty, who would ground out to third for final out.

I decided to check if anyone is bringing the 1909 Detroit Tigers to the GMABT III, and there is... My friend Ron Emch (who runs the Glass City APBA Baseball Tournament in Toledo area); Emch and I, have had the privilege of playing each other at the previous two tournaments, with my teams holding a 3-1 edge. With the way, both Cobb & Crawford (5-for-7) played... please don't hold it against me, Ron if I hope I don't have to cross paths with those two players.

This Time of Year 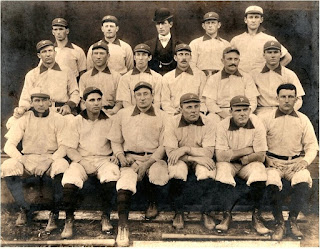 This time of year (of course) is usually the slow time of year, for all things Baseball, even in APBA Baseball. Many of us our getting prepared for our annual APBA card or APBA computer leagues, if that being current players or retro league players.

It's also the time of year that the new inductions to the MLB Hall of Fame happen as well, and each year always sparks quite a few debates. For me & my brother Chris, we always seem to send emails on plenty of information to each other about a many deal of players, and I love the fact that we are usually on the same wavelength. We often question today's sports writers and where their thought-process (or lack of) was in their decision-making when it came to the Hall; It raises many questions when a pitcher like Greg Maddux was actually left off a single ballot... Seriously, what is this writer's name, and what's his address again?

No, no... don't worry, I will not be hunting down some writer... personally, he's not worth my time.

This is, also the time of year, that I start getting my Greater Michigan APBA Baseball Tournament Team, ready to go (by doing exhibitions with them) for the upcoming tournament on March 5th. I am on the fence though, I'm a bit superstitious with things, when it comes to what works... Last year, I played the 1993 Atlanta Braves, but had no chance to do any exhibitions for them, due to the fact that I realized that my 1991, 1992, 1993, 1995 & 1947 APBA sets were actually still in my folks' attic, at my folks' house in Kingsley.

I dug & dug for the 1993 Atlanta Braves with no luck... I swear that I may have found a deep space wormhole in their attic, where things simply disappear -- hopefully this means, at worst, that there is some alien life form rolling 66's with my old APBA collection.

My friend, Pastor Rich Zawadzki (Host of the GMABT) came through & provided me with his 1993 Atlanta Braves. He lent me the team at the Chinese Restaurant in Jackson, and on that night, I played a scrimmage against (my other friend) Ken Schulz, between my Braves & his 1971 Pirates team. I won with a game-winning HR by Sid Bream, who once again ripped the hearts out of Pirates fans.

The next day I woke up at the hotel, feeling like it was MY day, it felt like the morning of the day of my wedding... Yes, two different things indeed, I just knew regardless it was going to be a great day. Everything that happened that day, ran magically, I started 4-0 & even after a butt-whooping that I suffered in the hands of the 1981 Milwaukee Brewers, I still felt that it was my day....

For one thing, I have my current GMABT right in my possession with the 1901 Pittsburgh Pirates; This year's tournament's theme is 'Deadball Teams' between 1901-1919. I will be the first to say that I don't know how to play 'Deadball Teams' to the same degree as Scott Fennessey (who won the 2013 Chicagoland World Series - Fall Edition). So with that in mind, I may do plenty of exhibitions to get this team rolling.

I do have a Deadball book on the National League teams, and will be doing the research available to prepare my team strategically...

Regardless, it will be a lot of fun!
Posted by Shawn Nova at 2:31 PM No comments:

The 1983 NXPL Season has been rolling for about a month now, and the pennant races in both leagues (especially the American League) are really close, with no clear favorites.

My Detroit Tigers entered this season, as the defending American League Champions, after losing the 1982 NXPL World Series in seven hard-fought games to the St. Louis Cardinals. It's a computer league in which consists of 15 other owners like myself, in which we make the moves necessary to improve our teams from year-to-year; We get to be the Owners, General Managers & Managers, all rolled into one.

Last season, it didn't take me long to feel a nice flow with my lineup & team -- and for the last two seasons, my two starts to the seasons, consisted of 7-3 & 8-2 starts... this year, however, I came out of the gate at 5-5, while I have had trouble trying to get Ben Oglivie & Jason Thompson going at the plate.

The team as a whole, has been playing better of late, with the team going 11-9 since, while only trailing the first-place Baltimore Orioles & Chicago White Sox, by a single game at 16-14. My Tigers have actually played much better on the road (7-3) compared to my managing at home (9-11), hopefully we can get that straightened out. 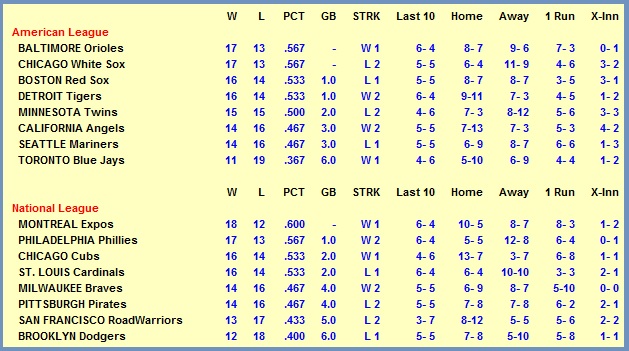 We still have a stellar pitching staff, with Tom Seaver rebounding in 1983 for us (joining the staff) with Mario Soto, Dan Petry, Joaquin Andujar & Walt Terrell. Here is how they stack up...

Other than Soto, the entire rotation has already pitched a complete game, including one by spot-starter/reliever Dave Rozema; Plus 3 shutouts!

Starters ranked by WHIP (Walks + Hits / Innings Pitched):
For the hitting, Ben Oglivie had a multi-homer game, while producing 3 homers last series, to finally lift his batting average over .200 (.222) -- he does rank among the team's RBI leaders (12).

While those players have done well, I need Oglivie (like mentioned above) to step up along with Jason Thompson, Kirk Gibson & Mookie Wilson.

There is still plenty of season, so while we are starting to show some encouraging signs for what's to come this season, I hope & expect to see more positive outcomes.

Email ThisBlogThis!Share to TwitterShare to FacebookShare to Pinterest
Labels: NXPL 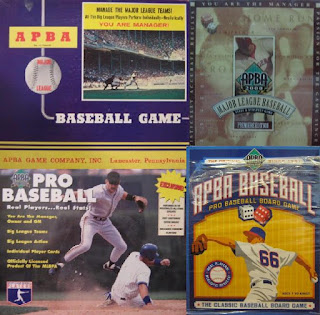 So Happy New Years! Sorry for the long, long wait, on a new post presented by the Boys of Summer. My last post was December 30th, and I mentioned in my December 26th post that I planned to hit the new year running... So far, that running is about as pathetic as Cecil Fielder attempting to steal second, LOL!

During these last few weeks, I have been conducting league business with my Boys of Summer APBA Baseball League, while at the same time, the wife & I have been diving under the covers to stay warm from all this snowfall here in northern Michigan.

These last few weeks I have not been doing much APBA (even though I have been dying to roll the dice), but that has not stopped me from enjoying many of my APBA friends' wonderful APBA projects.

There are many more fun projects from many friends & other APBA Facebook Group, so to those, if I left you out, that's my bad, I am sure I have enjoyed many of your replays in the past.