APBA Announces Greatest Teams of the Past IV! 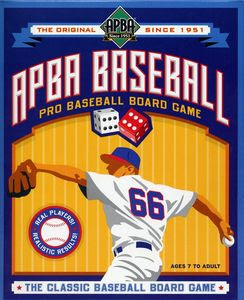 Great news in the APBA Baseball world...
APBA has announced the release of Greatest Team of the Past IV!


Here are the National League teams representing this latest set...

The American League Teams...
I'm really excited about the news for several reasons...

First off, it's been long overdue, the wait that is... plus now there is brand new excitement for this hobby, I think APBA has done a great job of late, in being active on plenty of new APBA products such as APBA Go, the yearly playoff team sets, reintroducing All-Star Team sets, and now the new GTOP IV & with all the recent activity by the company, I have a feeling that GTOP V may not be far around the corner.

Rich has been instrumental in helping me acquire plenty of teams in the past, when he would notice them on eBay, he would message me the link. I have since put together a pretty solid APBA teams collection, nothing quite like his impressive collection though.

Just recently I have tried to acquired the long sought-after 1922 Browns team, along with the 1930 Cardinals, 1950 Phillies & 1959 White Sox off of an APBA Facebook Group member who posted those available teams among other teams, I messaged him, also tagged his name, and got no responses... So naturally at the time, I was bummed out.

Then to read this morning that these teams are part of the Greatest Team of the Past IV, I was thrilled by this news.

Teams of GTOP IV that I already own...


This doesn't mean though, that these new GTOP IV sets might not be different, usually with reissued team sets, not to mention the fairly new 'K' and 'R' strikeout ratings, you will definitely get some new modifications. I do also remember that the GTOP sets, now also have the Master Card ratings on the cards as well... so I'm still thrilled to get these modified duplicates.

I'm pretty excited about this, and you should be too...
$40 for 20 great teams, to me that's quite a deal, I hope this means more GTOP sets to come, in the near feature.

Here is the link to the APBA Baseball store...
http://apba.stores.yahoo.net/apbabaseball.html
Posted by Shawn Nova at 12:00 PM

Email ThisBlogThis!Share to TwitterShare to FacebookShare to Pinterest
Labels: APBA, APBA Collection, APBA Great Teams of the Past