Lofton: The Unluckiest Player Ever? 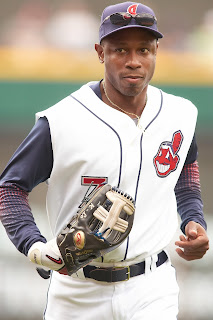 Last night, me and my brother Chris Baier were trading emails back & forth, and he brought up Kenny Lofton. He mentioned that Lofton is criminally underrated (which I agree) and that he belongs in the Hall of Fame, which I feel he has a worthy case.

Chris mentioned the fact that he had close to 2,500 career hits (2,428 to be exact), could flat out hit (.299 career batting average), and that his only competitor stealing bases during his era was Marquis Grissom; On top of that he had several gold gloves & helped make his ball-clubs winners. If he had championship rings, he could really build a case...

but that's just it, he has no rings.

My younger bro, listed all of Lofton's chances, and how he kept coming up with no cigar. After you read the list below, you may start to believe that Lofton is indeed, the unluckiest player ever...

Seriously, that's a lot of bad luck!
Posted by Shawn Nova at 1:26 AM

Email ThisBlogThis!Share to TwitterShare to FacebookShare to Pinterest
Labels: Features