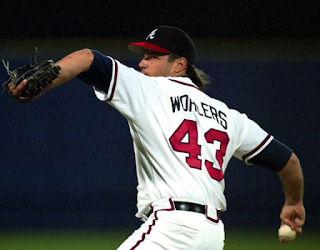 Where we last left off the Atlanta Braves finally won the World Series by defeating the Toronto Blue Jays in the 1996 World Series, becoming the first franchise to win a world title in three different cities (Boston, Milwaukee & Atlanta).

The Braves were playing pretty solid ball in the first two months, but the team hit a snag in June, while the Dodgers blazed past them at a .726 clip. The Dodgers a few times throughout the season would put a 10-game lead on Atlanta.

The Braves traded struggling starting pitcher Doug Drabek to the Kansas City Royals, who at the time were challenging for the A.L. West. The deal didn't cost K.C. much, with Atlanta eating the entire $4.0 million in Drabek's contract, while acquiring minor prospects in OF-Rod Bair & 1B-Danny Buxbaum.

The Braves needed to add another bullpen arm after the injury to Dan Plesac, so they traded top team prospect C/1B-Craig A. Wilson to the Philadelphia Phillies for RP-Jay Powell.

On September 10th, the Braves got within 6 games, and were playing the Dodgers at Dodger Stadium. The game was Pedro Martinez vs. Tom Glavine, and both pitched extremely well, but the game would go to extras. The Braves' Marty Malloy, in his first at-bat of the season, tied the game in the 8th inning, with a RBI single to right off of reliever Mark Guthrie. The Braves would eventually take a 4-2 lead, with back-to-back RBI singles by Jason Giambi and Ryan Klesko.

The Braves held onto their closer, Mark Wohlers, for the Top of the 11th, hoping to close the door on the Dodgers during this extra-inning thriller, and dwindle the division lead down to 4 games.

The only problem is that Wohlers has been anything but automatic during his 1997 season. During the Braves' 1996 World Championship season, Wohlers was lights out, sporting a 2.00 ERA, 33 Saves with a 1.00 WHIP in the process... This Season? Wohlers' ERA ballooned to 4.22, while his WHIP went up to ugly 1.63. The problem was his control, walking 6.2 batters per 9 innings (nearly three times higher than his 2.1 average a season before).

Wohlers was up against the Dodgers' heart of the lineup in Piazza, Mondesi & Olerud. Wohlers managed to strike out Piazza & get Mondesi to fly to center... but then came the Valverde-esque control issues, walking both Olerud & Kevin Orie (of all people). Bobby Cox visited the mound, in which Wohlers said he had no more in the tank.

The Braves called on starting pitcher Alan Benes to come out to the mound. Alan, was used much in the same way as the 2017 Houston Astros used Lance McCullers Jr during the final World Series game -- coming in for a rare save in the clutch. This time it didn't work, as Benes would allow a RBI single & then walk in the tying-run. He would lose the game, with a walk-off RBI single by pinch-hitter Dan Rohrmeier, as his Cinderella story continues. 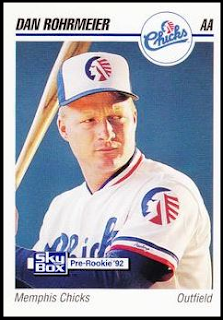 The Braves finished with 102 wins, but failed to win the division, finishing 8 games behind the Dodgers, who finished a stellar 110-52.

After a 2-0 Dodgers series lead to the World Series, the Yankees would fight back to tie the series, 3-3, but the Dodgers, fittingly, prevail, thanks to World Series MVP Roberto Kelly, who hit 3 HR & 10 RBI.

The Braves' Mark Wohlers was up for salary arbitration, and according to club officials, they felt he was due for a $460,000 raise. I felt otherwise, and withdrew his offer altogether, which would save about $2.2 million in annual salary. I feel the bullpen arms in Roberto Hernandez, Mike Timlin, Dan Plesac, Paul Qunatrill & Jay Powell are more than enough to power us through, while we should continue to be one of the best bullpens in all of baseball.

Johnny Damon will get a well-deserved raise as he should see his annual contract of $273,000 go up from anywhere from $3 million to $4 million per year.

I'm on the fence with outfielder Ruben Rivera, who appears to be in the neighborhood of getting close to $0.5 million from his current $1.76 million contract. I feel at the moment he's overpaid as it is, especially since he will be nothing more than a 4th outfielder for me. Sure Ryan Klesko's defense in left kills me, and I have no room for Klesko at first base with Jason Giambi there... but I am not ready to get rid of that powerful bat that sits nicely with Chipper Jones, Giambi & Javy Lopez.

This upcoming off-season will be interesting, one part of me is wanting to cut some salary, while I don't want to be in a situation where I cut a player, but end up with nothing to fill in that player's place.

Email ThisBlogThis!Share to TwitterShare to FacebookShare to Pinterest
Labels: Alternate 1993 Project, Out of the Park