From the BoS Blog Vault - Originally posted on June 14, 2015 - I decided to share this post in my 'Vault' series, due to a recent Facebook post that involved the 1961 New York Yankees. In this post, you will find very interesting debates, while you will find out exactly why the 61' Yankees are quite overrated.

Now a few months back, I remember from time to time people bringing up best three-year period or five-year period from a MLB franchise. It had some of the usual suspects bouncing around there from the Baltimore Orioles (1969-1971), Oakland Athletics (1972-1974), The Chicago Cubs (early 20th Century), the two different Philadelphia A's franchises from Connie Mack, the WWII era St.Louis Cardinals, among others.

The wife and I went to the public library, in which I once again, rented out "The New Bill James Historical Baseball Abstract" (by Bill James) -- Another book, I like to rent from there is "The Biographical Encyclopedia of Negro League Baseball" (by James A. Riley) -- Both great books! This time, it was just Bill James' books with a handful of Walking Dead Graphic Novels.

Now when it comes to Bill James, I will say this much the guy's formulas and his Win Shares that pretty much (or did, depending on who you ask) created the WAR stat concept (Wins After Replacement) -- and many of his formulas really do finish many debates on comparing players, teams and what-not. He may not be a guy that remembers watching that player back in the day, in fact he kind of approaches that aspect of the game with a half-glance approach, he's more of mad scientist who loves the game, will take the criteria, make strong cases -- while at the same time, he may not watch the game as the average die-hard baseball fan does... he's most likely not going to play in any fantasy baseball league, but he's partly responsible in many of the stats that we find helpful in choosing our fantasy baseball teams, plus his findings are also helpful to any APBA Managers out there, who are evaluating their rosters, making certain trades & drafting certain players.

Is he always right? No. Do I like reading his theories, and watching many of them make sense? Most definitely! By the way, my right arm is all oiled up with Tiger Balm, since my whole right arm is really sore from doing computer work for my APBA League & rolling some dice games -- but after reading one of his sections in this book, I had to share, and discuss this.

So back to Greatest Teams debate, he made a simplistic 6-point system to measure a team, of course this does not take in an effect if a team is a great base-stealing team, has a great pitching staff, or great lineup -- it's just a simple system, to start with.

The 6-point system is like this, for each accomplishment by the team, it will make a check by each statistical accomplishment, and the team gets one point each.

These qualifications are definitely not going to paint an over-all picture of a franchise, but when you use this system, for certain criteria, let's say for a 5-year period debate, this is how the very top franchises ranked using these accomplishments & six-point system presented by James.
It's impressive, while at the same time it all makes sense, these are the teams we usually are chatting about, and debating over. For pre-1969 teams, he counted League Championships (with an extra point, for the division they would have won, which makes sense).

Another point made, is that with this system, there has only been 6 teams to have had back-to-back six-point seasons, they are...
Once again, uncanny, looking at this list, all makes sense, and these 5 teams are always in the thick of the discussion.

Now this book is copyrighted in 2001, not sure if he has any more updated books, which this book was an update as well. So he did not add any more recent teams, so I decided to go do some research myself.

Now we all know how much San Francisco Giants fans love bragging about their pesky Giants, not to mention all their "dynasty" talk, which I often have to point out their two missed playoff years, that are wedged in between their 3 recent World Championships. Taking in this system, this is how what we ended up with...
That's a grand total of 13 pts -- Hardly great when comparing to these teams that had more points, during a five-year period...

Some people may look at these teams and say, you know those are some good solid teams --Of course they are not better than some of those! Granted that the 2010-2014 Giants can spin the debate, and note that they have more titles than each of these (above six) teams. But to put it into perspective, they barely edge their 1962 counterparts, the 62' Giants who scored 12 points from 1962-1966 -- let it be known though, that I am NOT saying the 62'-66' bunch of Giants are better than the current group, no way!

In the book, he brings up the 1919 Chicago White Sox ("Black Sox") squad of 1916-1920; He mentions there is no foundation to consider the White Sox among the all-time greats. They managed to score only 12 points, their multi-year accomplishments rank them lower than the...
...and dozens of other teams, and suggests that no one would list these teams above among the all-time greats. We do know if the Chicago White Sox didn't throw the 1919 series (and won the World Championship) & didn't have 8 players banned from the game in a close 1920 pennant race, that they may have even won, giving them another shot at a title, that those would add only a few more points to the system, and still would fall short of all the teams listed above. Once again, I am not going to imply that the 1979-1983 Orioles are better than the 1919 White Sox, or the period of the 1983-1987 Tigers are better; I will say that the Tigers' 1984 World Championship season alone succeeds over any one year accomplishment by those White Sox teams though.

By the way, good news Giants fans -- You can say that your 2010-2014 teams are at least better than a historical team in the "Black Sox"; The White Sox were a good, strong team, but not among the all-time greats -- their reputation for the scandal makes people consider them great. But the 1916-1910 White Sox or the 2010-2014 Giants, are not anywhere close to be overrated than say...

... possibly the most over-rated team of all-time, when we are talking about greatest team debates...

I'm so glad when I read this book that Bill James hammers on many key points when discussing this team. I often have to bite my lip on the APBA Facebook Group, when people often bring this team into the greatest teams of all-time discussion -- they are nowhere close! The 1976-1980 Yankees may be a stronger group even. Now let me point out that the six-point system is the only thing that helps the 1960-1964 New York Yankees bunch, they are tied for second-most with the 1906-1910 Chicago Cubs & 1942-1946 St. Louis Cardinals with 24 pts. 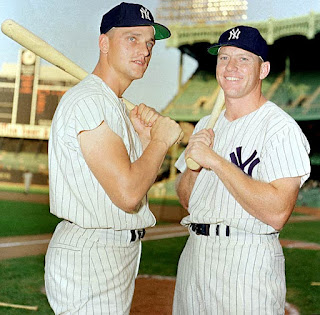 The Yankees ended up choking in the 1960 World Series to the Pittsburgh Pirates (even though they outscored the Pirates that series), they dominated a Cincinnati Reds team in the 1961 World Series, 4-1 -- a Reds team that really wasn't the best team from the National League, according to Pythagorean Records, the 93-win Reds were the equivalent of a 83-win team, and that the 3rd Place San Francisco Giants (a Pythagorean N.L. best 89 wins) would have been a much-better challenger to the somewhat declining Yankees. The Yankees would barely edge those Giants in 1962, 4-3 in the 1962 World Series. In 1963, the Los Angeles Dodgers would sweep the Yankees & they would lose the 64' Series to St. Louis.

Now I am not saying that their 1960-1964 period was not impressive, they went to the World Series all five years -- winning two World Championships.

But once again, we are focusing on the 1961 World Series team, so back to James' points. Three points he would put detail into...

1) Their offense is completely one-dimensional (Lots of HR's).
2) No bench (besides Johnny Blanchard).
3) Whitey Ford - Only quality arm on the team.

In MLB history (as of 2001) there have been 40 teams to lead the league both in runs, and to lead in fewest runs allowed; Many teams that have done this, are among the best ever...

The only thing Yankees did well in 1961 was hit many HR's, the only thing that they led their league in -- compare that to the 1976 Cincinnati Reds, who led nearly every offensive category; Reds had 212 more runs than the N.L. average.

The 61' Yankees pitchers, 6 out of their 11 pitchers on their staff, went on to win 35 games or fewer for the remainder of their careers.

The M&M boys (Roger Maris & Mickey Mantle) paint this image of the 1961 Yankees as some great powerhouse of the past, when in reality we should be giving more credit to their 1962 team possibly, which beat a much tougher World Series contender.

Anyways, when you take much of the statistical proof provided by Bill James, it's easy to see that the 1961 team was indeed overrated & do not belong with the absolute greats; Good team, and a Yankee fan favorite for sure, but a little too much ticker-tape if you ask me.
Posted by Shawn Nova at 8:00 AM

Email ThisBlogThis!Share to TwitterShare to FacebookShare to Pinterest
Labels: The Vault